Wow…who remembers this song then?!

I remember exactly where and how I found out about this song – it was on a little game called Tap Tap Revenge 3…remember that? What ever happened to that game?! 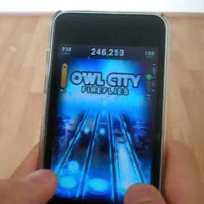 Anyway, I downloaded this song, Fireflies, by an unknown artist to me, Owl City, whilst playing TTR3 in my room. I must’ve played this particular level of the game at least 10 times in a row that day – I couldn’t get enough of it! I looked online everywhere to find where to download it, and couldn’t find it anywhere. It turns out, it wouldn’t be released in the UK until about 6 months later.

Anyway, I remember telling everyone that this song was going to be huge…then whatdyaknow…6 months later, the songs released in the UK and goes straight to number 1!

It’s since been covered by many people and been featured in a variety of adverts and other forms of media. Well done Owl City – you made a very good ditty!

Is there anyone who doesn’t know this song…surely not! Did anyone else play this on TTR3, like I did? And what’s throwing back your Thursday this week? Please share this link with your friends and leave a comment with your song for the week, below.