On Friday 10th May 2019, the massive Japanese band – ONE OK ROCK – arrived in London. It was only the second date on their EU leg, of the Eye Of The Storm World Tour and they performed at none other than London’s renowned Roundhouse. The band put on a night to remember, supported by British pop outfit, Anteros.

The band took to the stage with their vibrant personas and glitzy 80s synths, further reinforced by lead singer, Laura Hayden’s sparkly red dress. This band are a wonderful blend of indie, pop and new wave – think Blondie meets modern-day contemporary pop; along a similar vein to Fickle Friends. There are certain punk-like trends to Hayden’s stage presence, with her almost “don’t-give-a-damn” flounces around the stage, equally met with gusto – it’s quite mesmerising. The music is good and their energy was captivating to watch.

Highlight: The high-energy end to the band’s set made for a chaotic last impression, certain to leave people wanting more. 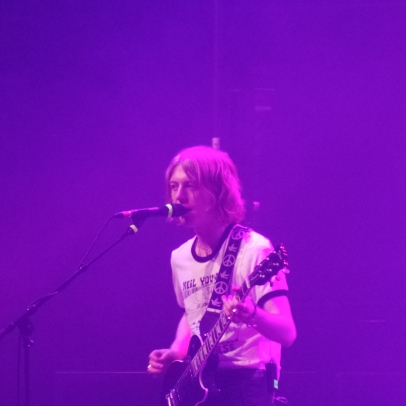 The band have only played in the UK a couple of handfuls of times but it was clear from their loyal fan base, just how much their performances are looked forward too, with a queue that lined up all round the streets, prior to the show.

As ONE OK ROCK took to the stage, the crowd whipped themselves up into a frenzy as the Japanese band launched into their opening track, ‘Push Back’. This was a set that despite the relatively small stage in comparison, felt just like an arena show…complete with pyros!

The set was teeming with a few older hits, plus a whole bunch of songs from their latest record, Eye Of The Storm (<— review here) – all of which had the crowd singing at the top of their lungs! Their energy was truly infectious from start to finish.

I was particularly impressed by Taka’s live vocals – so often you can hear little flaws in a singer’s voice when they’re performing live, but the power and effort he put into his performance was virtually flawless…even if he did keep fiddling with his in-ear throughout the show.

The quartet know just how to put on a show though; from Taka’s ability to capture the crowd by holding a particular stance and Toru’s rocking out with his guitar to Ryota’s powerful bass moves and Tomoya’s face poking up over the drums, as he beats away at them effortlessly – this is a band that you need to see live. It’s clear that they have spent a long time practising and perfecting their set – there isn’t too much between-song banter, but instead just packing in the songs, to give the audience a great time.

It was my first time seeing the band live and I had an amazing time – it’s so often that the UK send great bands and artists over to Japan to perform but it’s great to see a Japanese band coming over to the UK for a change! I strongly recommend catching this band live, the next time they make a rare appearance in the UK – you won’t be sorry, I promise!

Finally, I want to say an absolutely HUGE thanks to Robbie Peacock for enabling this review to happen and to both ONE OK ROCK and Anteros for putting on a fantastic show.