Between You & Me are a pop punk band from Melbourne, Australia. With the success of their stand alone single, ‘Overthinking’, after signing to Hopeless Records, the band are releasing their debut album, Everything Is Temporary. Here are our thoughts on the record… 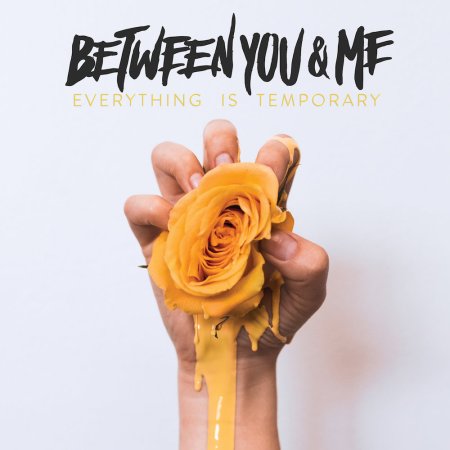 The pop punk genre is saturated with bands that often sound the same, all pumping out new albums constantly, making it pretty difficult to stand out in the market. I actually only gave this one listen before starting to write the review and have to say on first listen I thought this could just be another one of those bands. I’m pleased I gave it a second listen though as this truly is a strong debut.

It kicks off with the punchy ‘Twice Shy’ that shows off some fancy finger work on the guitars, though I would say this is quite a typical album opener for a pop punk band.

‘Move On’ is another great track that continually builds into the final chorus after a stunning little euphoric breakdown. It’s filled with some superb pushes and there are even some subtle happy hardcore vibes going on.

A mixture of angry and heartfelt lyrics, thrashing guitars you can mosh to and highs and lows in all the right doses.

Some of the best tracks on the record have to be: ‘Dakota’ for being an angry break-up anthem with amazing melodies and a hella catchy chorus; ‘Good Intentions’ which completely changes pace and tone part way through – it’s a wonderfully interesting track; ‘Floral Glass’ is a powerful song about losing someone and remaining strong and the “don’t-give-a-fuck anthem, ‘Everything Is Temporary’, all about living life in the moment and having no regrets, knowing that you have to make the most of the good things in life, as they won’t last forever, whilst also knowing that neither will the bad.

There are a few clichés here and there, but that’s almost to be expected with this genre; ‘I Can’t Help It…’ is a short, self-indulgent cry for help and whilst it’s a great song, ‘Friends From ’96’ is an emotive reflection on times passed, starting with a mellow, acoustic intro before building into a full-band song.

That said, it has a bit of everything you could want from an album of this genre; a mixture of angry and heartfelt lyrics, thrashing guitars you can mosh to and highs and lows in all the right doses.

The album is a solid effort and a strong debut from the Aussie pop punkers; it doesn’t necessarily push the boundaries of the genre, but it will certainly have a place in every pop punk fan’s collection. It’s a real shame it’s only just over half an hour long as it’d be good to hear what more they have to offer, but this is surely the start of something great for the quintet!

‘Everything Is Temporary’ is out now and can be downloaded from iTunes – https://itunes.apple.com/gb/album/everything-is-temporary/1372365918

Everything Is Temporary on Spotify

We hope you’ve enjoyed our review! What do you think of the band’s debut album? What would you rate it? Please leave your thoughts in a comment below or via our social media.