With Confidence are a pop punk band from Sydney, Australia, who formed back in 2012. Having been through some line-up changes, the band now consists of Jayden Seeley (lead vocals & bass), Inigo Del Carmen (lead guitar & backing vocals) and Joshua Brozzesi (drums). In 2016, the band signed to Hopeless Records and released their debut album Better Weather. Now, in 2018, the band are back with their sophomore record, Love And Loathing. Here’s what we have to say about it… 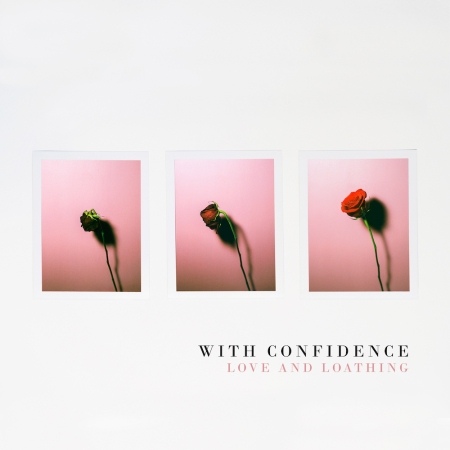 This feels very much like the band have studied and followed the recipe for making the perfect pop punk record, down to a tee…and that’s not even a bad thing! Somehow, the record feels timeless within the realm of the genre but without sounding like a carbon copy of so many others. After only a couple of listens, it feels just like returning to an old favourite that has been in my collection for years!

Opening track, ‘That Something’, is a stunning way to kick off an album – it’s got catchy vocals (but not obviously so) about finding a new love interest, paired with strong instrumentals of varied tempos, topped off with superb and subtle production flourishes.

Other huge tracks to take note of, include: ‘The Turnaround’ is a massive tune about making a change in your life and grabbing it by the horns, all accompanied by seriously incredible falsetto vocals; ‘Jaded’ which is a fast-paced thrashing track that you might find from the likes of Simple Plan; ‘Better’ is probably my favourite song on the record – about the desire to improve yourself with it’s occasionally satirical lyrics and soaring high-pitched vocal melodies, it’s a track you can easily get lost in.

Diversity spans the record: ‘Spinning’ is much calmer tune that has ‘woohoos’ and the subtle catchiness of a We The Kings or Maroon 5 track; ‘Pâquerette (Without Me)’ wishes an old love well with mellow acoustic vibes and ‘Icarus’ is a far grungier and more aggressive song that bares a resemblance to something by You Me At Six – it’s got heavy guitars and screamy vocals and adds a new depth to the record.

After only a couple of listens, it feels just like returning to an old favourite that has been in my collection for years!

Even in its lower moments, this is an album that feels overall, positive and like a band that’s been revitalised. The tracks each sound unique and interesting in their own ways; some outright pop punk anthems, other mellow, heartfelt ballads and even a couple of slightly more experimental numbers…yet it all still comes together as a cohesive record. Love And Loathing is just that – a record of two halves, covering the excitement of new relationships and hatred of old ones.

It is a tight, well-produced album that, despite some recent, tumultuous events, feels like a band now set for even bigger things! Could this be the next All Time Low or 5 Seconds Of Summer? If you’re a pop punk fan, you will love every second of this record!

‘Love And Loathing’ is out now and can be downloaded from iTunes – https://itunes.apple.com/gb/album/love-and-loathing/1388719305

Love And Loathing on Spotify

That Something (Official Music Video)

We hope you’ve enjoyed our review! What do you think of the band’s second album? Are you as much of a fan as us? What would you rate it out of 5? Please leave your thoughts in a comment or hit us up via our social media.