It’s hard to believe that Avril Lavigne dropped her first single, ‘Complicated’, back in 2002 but since then, the songstress has had 5 studio albums, 23 singles, 27 music videos (including ‘Girlfriend’, which became the “first music video to reach 100 million views on YouTube”) and has even appeared on several television shows and films. Now, six years since her last, self-titled album, 2019 sees the singer-songwriter putting out her sixth studio album, Head Above Water; a personal account of the trials and tribulations she been through over the past few years. Here’s what we have to say about it… 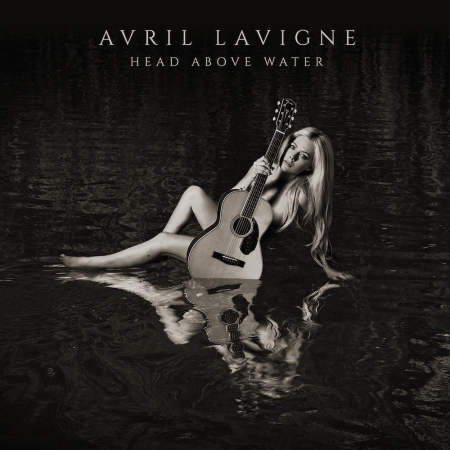 Head Above Water is probably Avril Lavigne‘s most mature album to date, seeing a real evolution in her songwriting. Throughout the record, she paints a candid, honest and deeply introspective portrait of a truly tumultuous period in her life.

It all begins with the album’s title track, ‘Head Above Water’, which is in fact the song that kick-started the writing of the whole album. She stated, “One night, I thought I was dying, and I had accepted that I was going to die. My mom laid with me in bed and held me. I felt like I was drowning. Under my breath, I prayed, ‘God, please help to keep my head above the water.’ In that moment, the song writing of this album began. It was like I tapped into something. It was a very spiritual experience. Lyrics flooded through me from that point on.” In this truly stunning track alone, Avril Lavigne documents her fight with Lyme Disease (as a result of which, she set up The Avril Lavigne Foundation, to raise awareness of the condition – visit http://www.TheAvrilLavigneFoundation.org for more information), showing her strength of character to fight and overcome it.

As if that song wasn’t different enough, ‘Birdie’ demonstrates a diverse instrumental with intricate production where stripped-back moments show off her voice beautifully and a distorted vocal break adds another dimension to the track in which compares herself to a caged bird.

Equally, ‘I Fell In Love With The Devil’ and ‘Tell Me It’s Over’ are both tinted with Lana Del Rey-esque vibes. The first blends both high and low-pitched vocal harmonies to create an ominous tone to the track, perfectly mirroring the theme of a toxic relationship, whilst the latter’s sultry vocals and brass elements in the verses lead into a massive, soulful chorus, making it possibly the most unique song Avril has ever released.

There is a bit of a lull in the uptempo vibes towards the middle-end of the record (but still great tracks!) ‘Souvenir’ is a cute little love song that although a touch juvenile, is actually very endearing, whilst ‘Crush’ is a sparkly-sounding, soulful number.

It might not be her most obviously banging release, but it certainly packs a punch on the emotive side, with such wonderfully poetic lyricism.

‘Bigger Wow’ isn’t the most memorable song though it’s incredibly catchy and unequivocally pop, however I can’t help but feel it’s virtually a carbon copy of Hailee Steinfeld‘s single, ‘Starving’ with Zedd.

That said, although on the whole Head Above Water is quite the far cry from any of her previous releases, there are definite nods to her former sounds. ‘Dumb Blonde’ (featuring none other than Nicki Minaj – which was clearly a last-minute addition to the track, as the review version of the album did not feature her at all) takes a massive leaf out of her 2007 smash hit, ‘Girlfriend’. Additionally, ‘It Was In Me’ has a massive throwback vibes to her 2002 hit, ‘I’m With You’, but nevertheless, it’s amazing and the build up at the end is truly goosebump-inducing!

The album draws to a close with ‘Warrior’, thematically bringing us back full circle to where we began. The lyrics possibly aren’t the most imaginative on the record but they certainly show the strength she has found within herself, to get through some of the toughest years of her life and with that comes an audible gratitude and renewed lease of life.

Whatever you think of Avril Lavigne‘s previous incarnations, you can’t hear this album and deny that it’s a passionate and very personal offering from the star and although there isn’t a completely cohesive style throughout, it’s refreshing to hear her trying something new. The break has done her voice good too – there’s a renewed power and technique behind it and she’s using it in ways she hasn’t much before.

Of course, there are bound to be people that will slate her for moving away from her old sound and those who will criticise her for trying something new, but personally I love and commend this record for being evolutionary and so clearly therapeutic. It might not be her most obviously banging release, but it certainly packs a punch on the emotive side, with such wonderfully poetic lyricism. Now it’s time to return to the top Avril Lavigne – welcome back!

‘Head Above Water’ is out now and can be downloaded from iTunes – https://itunes.apple.com/gb/album/head-above-water/1442724476

Head Above Water on Spotify

Tell Me It’s Over (Official Video)

We hope you’ve enjoyed our review! What do you think of Avril’s sixth studio album, Head Above Water? Are you as much of a fan as us? What would you rate it out of 5? Please leave your thoughts in a comment or via our social media.