Panic! At The Disco is an American band notable for its combination of alternative rock, synth-pop and emo lyrics, creating a very unique sound. After the huge success of the band’s debut album, A Fever You Can’t Sweat Out, back in 2005, they have had a string of albums, continuously kept their sound fresh and built up a very loyal following. Now, in 2018, and with only Brendon Urie in the official line-up, the now-solo project is releasing a sixth studio album, Pray For The Wicked. Here’s what we have to say about it…

Let’s just start by saying that this album couldn’t be further from their 2005 debut but somehow still manages to have a distinctive Panic! At The Disco sound… mostly due to Brendon‘s instantly recognisable vocals!

Throughout the band’s life, they have had many incarnations, from the cabaret-infused emo-pop of their debut, A Fever You Can’t Sweat Out (2005), to their Beatles-inspired, Pretty. Odd (2008) and even their remarkably elaborate 2016 offering, Death Of A Bachelor. Well, Pray For The Wicked is no different…it’s another eccentric overhaul of the act and with that, brings a new and exciting sound.

It all opens with the show-stopper, ‘(Fuck A) Silver Lining’; an all-out, overly-extravagant anthem that oozes an air of success about the guy. The production is top-notch and unapologetic about its use of heavy drum fills and lavish symphony instrumentation. I particularly love the use of the one-off beep where a “fuck” should be – a great little production addition.

This is a theatrical record that doesn’t hold back in any way, shape or form!

As with any Panic! album, there is a great deal of sass behind the lyrics but this record also serves as an honest reflection on certain aspects of his life; his religious upbringing coupled with his rise to fame but rather than focusing on him living the high-life (as was the case on 2016’s Death Of A Bachelor), delves further into the journey to get there. This is a theatrical record that doesn’t hold back in any way, shape or form! It could easily be the soundtrack to a film like The Greatest Showman or feature on Broadway.

Some of key tracks to listen to on this record include, the quietly catchy, ‘Hey Look Ma, I Made It’; the pop-infused ‘High Hopes’ which you can’t help but sing at full pelt; the aptly-named ‘Dancing’s Not A Crime’ – which is a bloody good thing, as you’re unable to hear this without busting out some moves; and the beautifully heartfelt ‘Dying In LA’.

There is a real amalgamation of sounds on this album, from the superbly-integrated brass sections throughout (which add a certain class and almost seem to flaunt the budget that must have been spent making it), to the urban flourishes, such as gritty vinyl sounds, ballsy trap beats and even hip hop-tinted, high-pitched vocal samples. There’s no escaping the fact that Brendon sounds like he had a friggin’ great time making this record and at the same time, was not afraid to push some boundaries.

One thing’s for sure; fans of label-mates, Fall Out Boy‘s, newer sound, as well as die-hard Panic! fans, will undoubtedly love this record…but I have a feeling that with this new direction, he might well be picking up a whole new army of fans too! There are moments here and there that I could give or take, but on the whole, this is an outstanding, current and contemporary album that I would just LOVE to see performed live!

‘Pray For The Wicked’ is out now and can be downloaded from iTunes – https://itunes.apple.com/gb/album/pray-for-the-wicked/1361152002

Pray For The Wicked on Spotify

Hey Look Ma, I Made It (Official Video)

We hope you’ve enjoyed our review! What do you think of this band’s sixth album? Are you a fan? What would you rate it? Please leave your thoughts in a comment below or via our social media.

No Rome is a recent, electro, synth-pop signing for London-based label, Dirty Hit (also home to the likes of The 1975 and The Japanese House). In fact, his upcoming EP, RIP Indo Hisashi, was produced by none other than The 1975‘s Matty Healy and George Daniel.

The first single to be taken from the upcoming release, is Do It Again. It certainly has a very similar vibe to that of his label mates, with its echoing vocals, atmospheric and cascading synths and richly textured production.

There’s no doubt that with this team behind him, No Rome will be about to embark on an exciting new phase in his musical career and I expect to be hearing a lot more from him in the months to come.

No music video has been released as yet, but I’m sure when one emerges, it’ll be artistic and mesmerising, if some of his photo shoot pictures are anything to go by.

What are your thoughts of this up and comer? Do you like his similar vibes to The 1975? Have you got a #MellowMonday track to recommend us? Please leave your thoughts or song suggestions in a comment or via social media.

Marianas Trench (Brighton show review here) are a pop rock band from Canada, who formed in 2001 and is fronted by the multi-instrumentalist and songwriter, Josh Ramsay.

To date, the band have released four full-length albums and in 2017, the band released this incredibly catchy, pop-infused, synth-driven anthem, ‘Rhythm Of Your Heart’. No details of a new album have been mentioned as yet, but with a strong single like this, surely one must be in the pipeline?!

The video (below) is pretty funky with all its neon-ness too.

What are your thoughts of this funky pop rock band’s latest single? Have you got a #FeelGoodFriday track to recommend us? Please leave your thoughts or song suggestions in a comment or via social media.

Geowulf is a duo comprised of members Star Kendrick and Toma Banjanin, originally from Australia. They started writing music a few years ago and released their first track, ‘Saltwater’, in July 2016, which now features on their debut album, Great Big Blue. Here’s what we had to say about it…

This album is Americana through and through and could quite happily be the soundtrack to a lazy afternoon around a Californian pool-side or whilst hitting the open road in a big convertible, wind through your hair, driving down an American highway. It has a strong resemblance to some of Lana Del Rey‘s music too…just with a slightly more light-hearted feel to it.

Prior to its release, the album enjoyed several successful singles but some of biggest highlights on the record include; ‘Sunday’, which is a beautifully mellow ballad, setting the tone for what’s to come (plus the opening lyric gives the album its title), ‘Saltwater’, is slightly more up-tempo with a real summery warmth to it, ‘Get You’, has an almost African rhythm, topped off with Star’s long, drawn-out notes, whilst ‘Drink Too Much’ is probably one of the most conventionally pop tracks, with a tongue-in-cheek look at how drinking a little more than you should, whilst on a night out, can land you in trouble when you get home, with the simplistic yet honest lyrics; ‘Coz I get myself in trouble when I drink too much, Think too much, And you’re somehow on my mind when I drink too much, Think too much.‘ At face value, it sounds cheerful and uplifting but when you listen to the lyrics, it’s a real oxymoron to the sound.

On first listen, the songs tend to blur a little into one, however it’s after a few plays through that you can begin to detect the differences between each track and truly admire Star’s euphoric vocals, Banjanin’s stunning melodies and understand the complexity behind the simplistic-sounding, psychedelic production, appreciating just how much time and effort must have gone into producing Great Big Blue. I have to say, whilst I really did enjoy this record, from start to finish, it is not necessarily an album that you will want on repeat for weeks on end; it’s a very good album but will it stand the test of time? Sadly, I’m not convinced.

‘Don’t Talk About You’ (Official Video)

‘Get You’ (Official Video)

We hope you’ve enjoyed our review of Geowulf’s debut album! What do you think of it? What would you rate it? Please leave your thoughts in a comment or hit us up via our social media to talk about it.

Prides (check out our interview here) have just dropped their latest single, ‘Let’s Stay In Bed All Day’ which is taken from the forthcoming album, A Mind Like The Tide (out next year). The album is actually being split into two parts, with Part 1 coming October 27th 2017.

The track sees the duo release a song which keeps to their trademark, synth-pop sound and it’s catchy as hell…I can’t wait for the rest of the album!

The audio video is below but no official music video has emerged yet, but we’ll keep you updated on this.

Matrix & Futurebound are an electronic duo who have just teamed up with ex-Britain’s Got Talent contestant (and incredible vocalist) Calum Scott.

The track has a summery vibe to it and Calum Scott’s passionate, ascending vocals weave their way beautifully throughout the uplifting instrumentation. It is a true anthem and begs to be sung at the top of your voice or pumped loudly through your car speakers. It’s a true feel-good track – I can’t get enough of this.

No music video has been made for this track yet either, but we’ll keep you updated on this.

‘Light Us Up’ can also be downloaded from iTunes now! – https://itunes.apple.com/gb/album/light-us-up-feat-calum-scott-nick-talos-remix-single/id1244764883

Although Christine and the Queens released ‘Tilted’ back in the UK in 2015, it seems like the perfect #MellowMonday track to kick off this week!

The song has had a few different incarnations but ‘Tilted’ is the one which found success in the UK, reaching the Top 20 of the UK charts when it was released.

The way Héloïse Letissier (Christine and the Queens) combines music, art, performance and videography is stunning – the translation of the song to the performance in the music video is astounding; a real masterpiece to behold.

What are your thoughts of this cool, quirky and intriguing track? Please leave your thoughts or own #MellowMonday suggestions in a comment below or via our social media, using the hashtag. 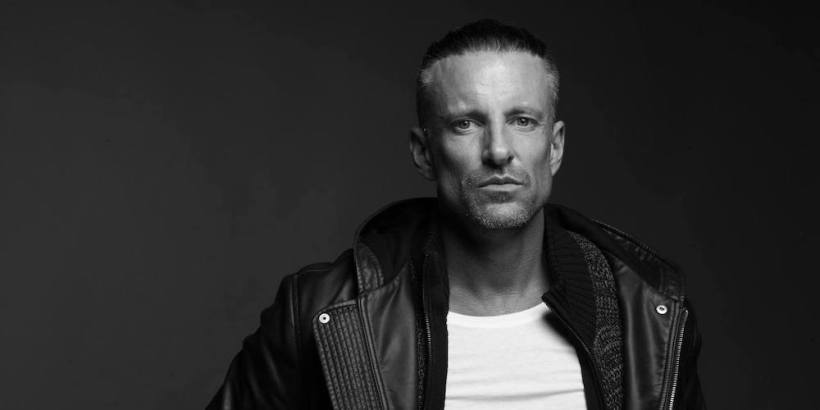 Check out our interview with Daniel Powter!

Daniel Powter is finally back with new music! He’s literally just released his first new single in four years, today, in the form of the rather funky pop tune, ‘Delicious’.

The song sees Powter using his fantastic, trademark vocal style but with a rather more synth-driven sound behind it and we couldn’t be more excited to have him back. It looks as if this could be signs of a new album from the unique and catchy singer/songwriter.

No official music video has been released yet, but we’ll definitely keep you updated on this!

What are your thoughts of Daniel Powter’s newest release? Are you as excited as we are about the thought of a new album from him? Please share your thoughts or own suggestions for a #FeelGoodFriday track in a comment below.

‘Delicious’ can be downloaded off iTunes now – https://itunes.apple.com/gb/album/delicious-single/id1187916657